This assignment will be submitted as a git repository on the NPS gitlab server.  Create a new repository named "mrc_hw2" using the server's web interface at https://gitlab.nps.edu

Exercise 1: Make a Package in Your Git Repository

In this exercise you will create a ROS package in your catkin workspace following the tutorials.  Execute these commands...

Add those two files to your git repository, commit the changes and push to the origin.

Use rospack to examine the dependencies.  Report the list of dependencies (both first order and indirect).

Record your answers by creating a text file in your mrc_hw2 repository called "ex1.txt".  This file should be at the path ~/catkin_ws/src/mrc_hw2/ex1.txt.  Add the ex1.txt file to the repository; commit and push.

Use the following to get help on the rospack command...

This should generate a lot of output - there are many packages installed!

We can use a pipeline to connect the output of our command to a program called 'grep' that will search through it...

where PATTERN is what we are looking for?

Put your answer in a text file called "ex2.txt" withing your mrc_hw2 repository.  Add the file to the repos., commit and push.

As an extension to the ROS Tutorial Understanding ROS Topics, write a shell script to control (open-loop) a turtle.

Make a new directory called "scripts" in your git repository.  Add a new file called "turtleletter.sh" in the "scripts" directory.  (The location of this file should be ~/catkin_ws/src/mrc_hw2/scripts/turtleletter.sh.) This file is your shell script. If your turtleletter.sh file looks like this...

You can then execute the script (which just calls each commend sequentially) like this...

If I have my turtle running I should see something like this... 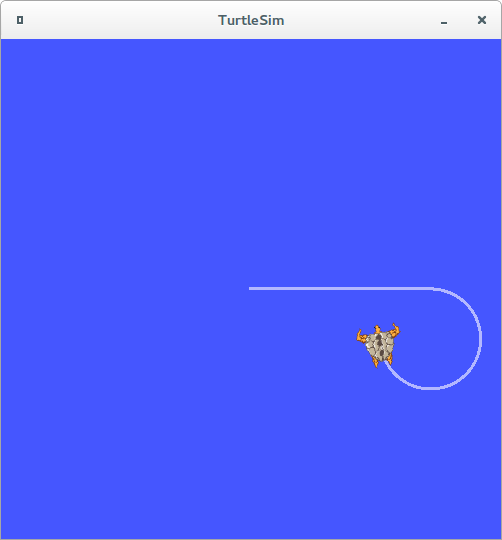 Modify the turtleletter.sh script to control your turtle to draw the first letter of your name.

Submit your solution by making sure turtleletter.sh is part of your repository and commit, push.