This assignment consists of activities and exercises.

The first step in integrating a new sensor is to test it on its own.  You will establish a serial connection between the GPS receiver and your desktop/laptop.

Follow the instructions here - Garmin GPS18x - to start a ROS node that communicates with a GPS receiver.

Once you have the GPS working on the bench, integrate it onto your Pioneer.

Once you have things connected you should be able to test that it is working by running the ROS master your desktop/laptop and the GPS driver on the shuttle.

Terminal 1: Roscore on the Desktop/Laptop

You should be able to copy and paste the following commands to set the appropriate environmental variables and start the ROS master.

Using the coconut wirless, ssh into the shuttle PC on your

To use the following commands you will need to substitute the IP address of your desktop/laptop for the BASE_IP variable below.

Now we'll characterize the error in the GPS positioning by logging a bag file with the robot in one place.  As we did in the last assignment we'll want to be able to drive the robot via joystick, so we'll need to start the joystick drivers on the desktop/laptop and the Rosaria drivers on the shuttle.

Again, make sure to substitute the IP address of your desktop/laptop for the BASE_IP value below!

Now you should be able to drive the P3AT with the joystick.

Drive outside and put the robot in a safe location where it can remain still for a few minutes.

In a new terminal record a ROS bag file named "fix_static.bag".  This bag file should be in your mrc_hw7 repository in a directory named "data".  The bag file should subscribes to the "/fix" topic being published by the GPS node.

Without moving the robot, let the log file record for at least 5 minutes.  You can use rostopic or rqt_topic to make sure that lat/lon data is being published.

Once you stop recording, commit and push the mrc_hw7/data/fix_static.bag file.

Now we'll use MATLAB to process your fix_static.bag file.

Create a plot of the latitude and longitude reported by the GPS.  Use MATLAB to annotate the plot with the mean  of the lat/lon.

Save your figure window in the mrch_hw7/data directory as fix_static.png 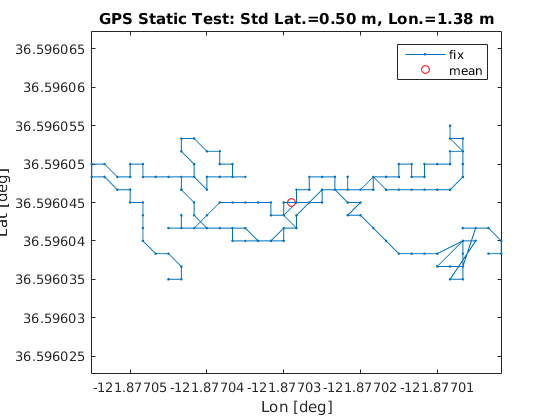 When you are done, commit and push the two files: fix_static.m and fix_static.png.

Next we will work toward integrating an IMU onto our Pioneer robots.

Work through the instructions here (UM7 IMU) to get an IMU working with ROS on your desktop/laptop.

Since the UM7 has both power and comms through USB, integration is a matter of physically mounting the device and connecting the USB to the shuttle. You will want to mount the UM7 as far from any electromagnetic interference as possible.  An example and 80/20 parts will be provided.

Ssh into the shuttle on your robot and execute the folowing.  AGAIN, make sure to substitute the IP address for your desktop/laptop for the BASE_IP value.

The shuttle.launch file starts three things: the Rosaria driver, the GPS driver and the IMU driver.

Terminal 3: rqt_plot of yaw on Desktop/Laptop

Drive your Pioneer outside

Generate a figure that shows the time series of the yaw angle (in degrees).  Save this figure as mrc_hw7/data/imu.png, add to your git repository, commit and push.

You should see the Pioneer drive up and down, returning to approximately the same location.  Here is a video illustrating what it should look like: vimeo link

Add your script and four figures to your git repository, commit and push.

When you are done, your git repository should look like this... 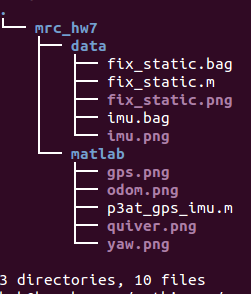