In many military applications, communications to unmanned systems are limited or prohibited and In the undersea domain, this is often the norm. Conducting submarine-launched Autonomous Underwater Vehicle (AUV) operations requires a level of autonomy for the AUV dependent on its assigned tasks, environmental conditions, and operational permissiveness. In some covert undersea operations, the AUV may not rely on acoustic communications for navigational or information management purposes, thus requiring the AUV to have some amount of on-board processing and decision-making ability based on sensor inputs.

The scenario of interest is for an AUV to be able to take in pre-determined coordinates (based on well-established "intel") to begin a search of an undersea cable that emits a magnetic field on the seabed, with control decentralized from the submarine or SEAL delivery vehicle and instead pushed to the AUV.

Thus far in ME4823, we have conducted essentially all data processing, algorithmic decision-making, and higher-level control on the laptop, and only communicated with the Turtlebot to issue actuator commands (/cmd_vel) and to receive sensor data (/odom, /amcl_pose, /rfid, etc.). In this package, we accomplish two major tasks: (1) Transfer ROS Packages onto the Raspberry Pi Model 3B Single Board Computer (SBC) so that the only means of issuing commands is by establishing a secure shell (ssh) via laptop; and (2) Develop a Control Algorithm in MATLAB's Simulink to detect an "undersea cable," which will be simulated by a row of RFID cars taped to the floor. The laptop represents the "manned submersible" and the TurtleBot represents the AUV.  The ThingMagic RFID reader represents a towed magnetometer, although field intensity is not measured; instead, only presence of the "magnetic field" or RFID emission is detected. We will remove other RFIDs from the area of operations (AO) to simplify things.

This assumes the user already has completed MRC 2019 Assignments 1-7.

Instead of the turtlebot3_nps git repository we've been using to pull down ROS packages, we will install packages from an external site, Robotis.

You will also want to install the ros-robot package the same way. This contains the robot state publisher, which is necessary for amcl and the map_server to function properly.

We now want to transfer ROS packages that we already have on the laptop over to the Turtlebot using the scp command. scp allows you to use the ssh port to transfer files from the laptop to the remote server (Turtlebot) or vice versa. If secure copying a directory, you'll likely want to use the recursive option ( -r ) with scp.

In order to ensure you are able to run the ROS packages embedded on the SBC, this exercise involves simple commands given to the Turtlebot from the laptop, except it is ssh'd into the Turtlebot so it is as if there is no actual communication between the laptop and Turtlebot.

In order to ensure everything is working from the manually controlled survey, let's plot the vehicle's path and RFID detections. In the project gir repository, matlab/embed_wp.m provides a file for post-processing. Be sure to use odom or amcl_pose as appropriate. 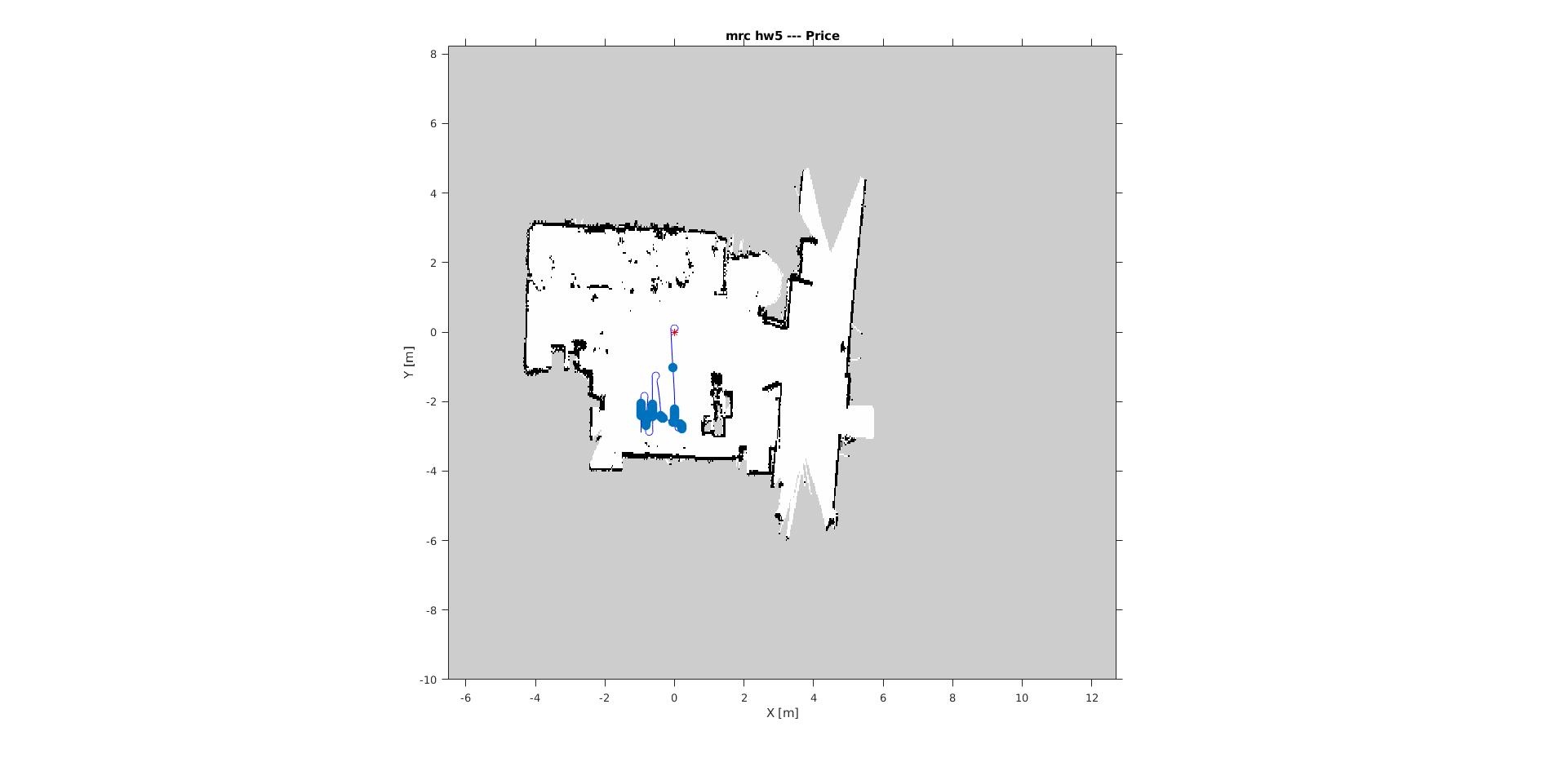 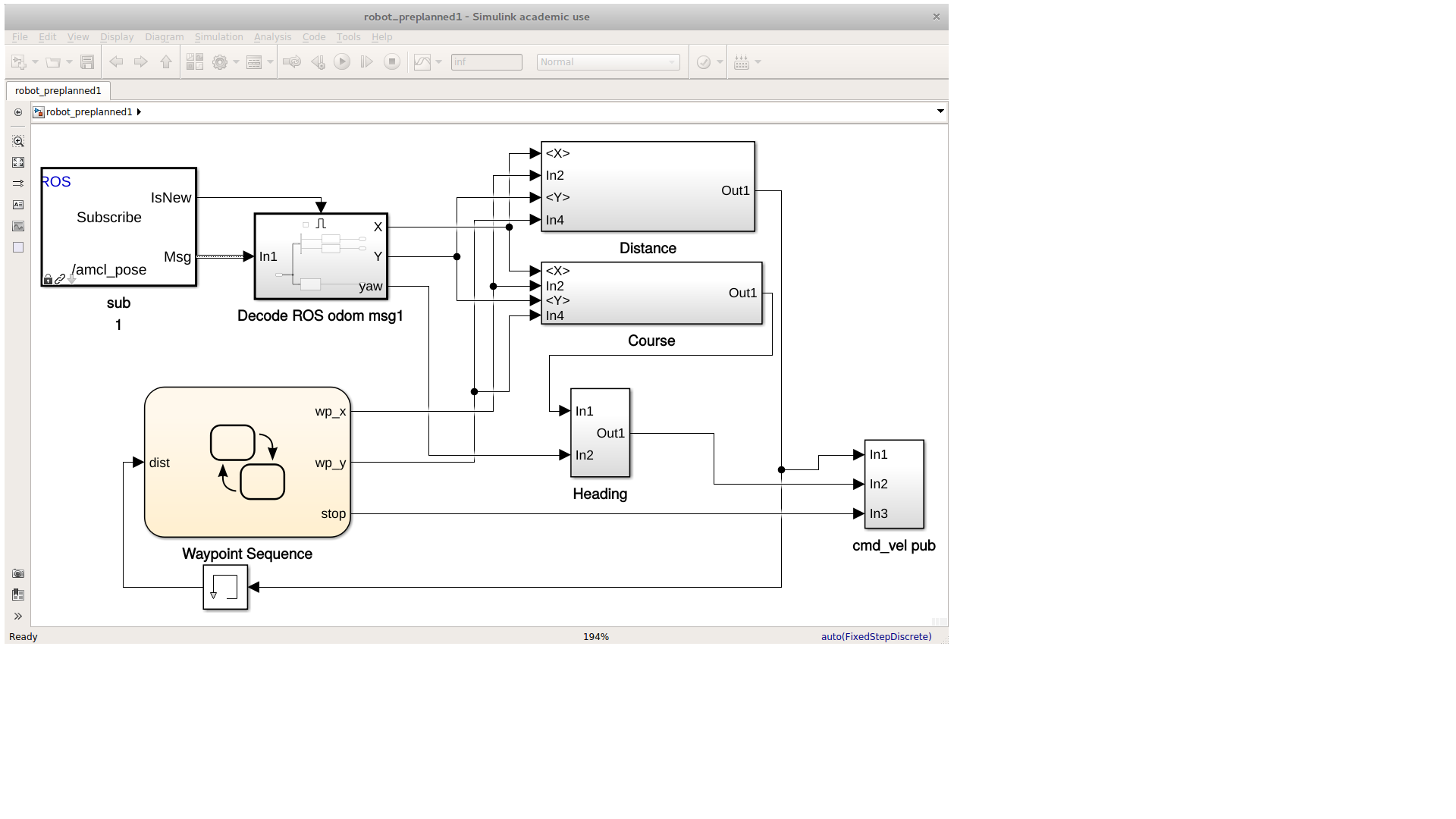 Running it all on the Turtlebot

The main goal of the project was to use the tools gained in the class to develop a turtlebot that could run autonomously, i.e. completely separate from the ROS laptops. With the standalone simulink node complete, you now have the ability to do this.

From the laptop, open six terminals and ssh into the turtlebot in each one. Run the following:

Alternatively, you could combine several of these into one launch file, which would make the process easier. 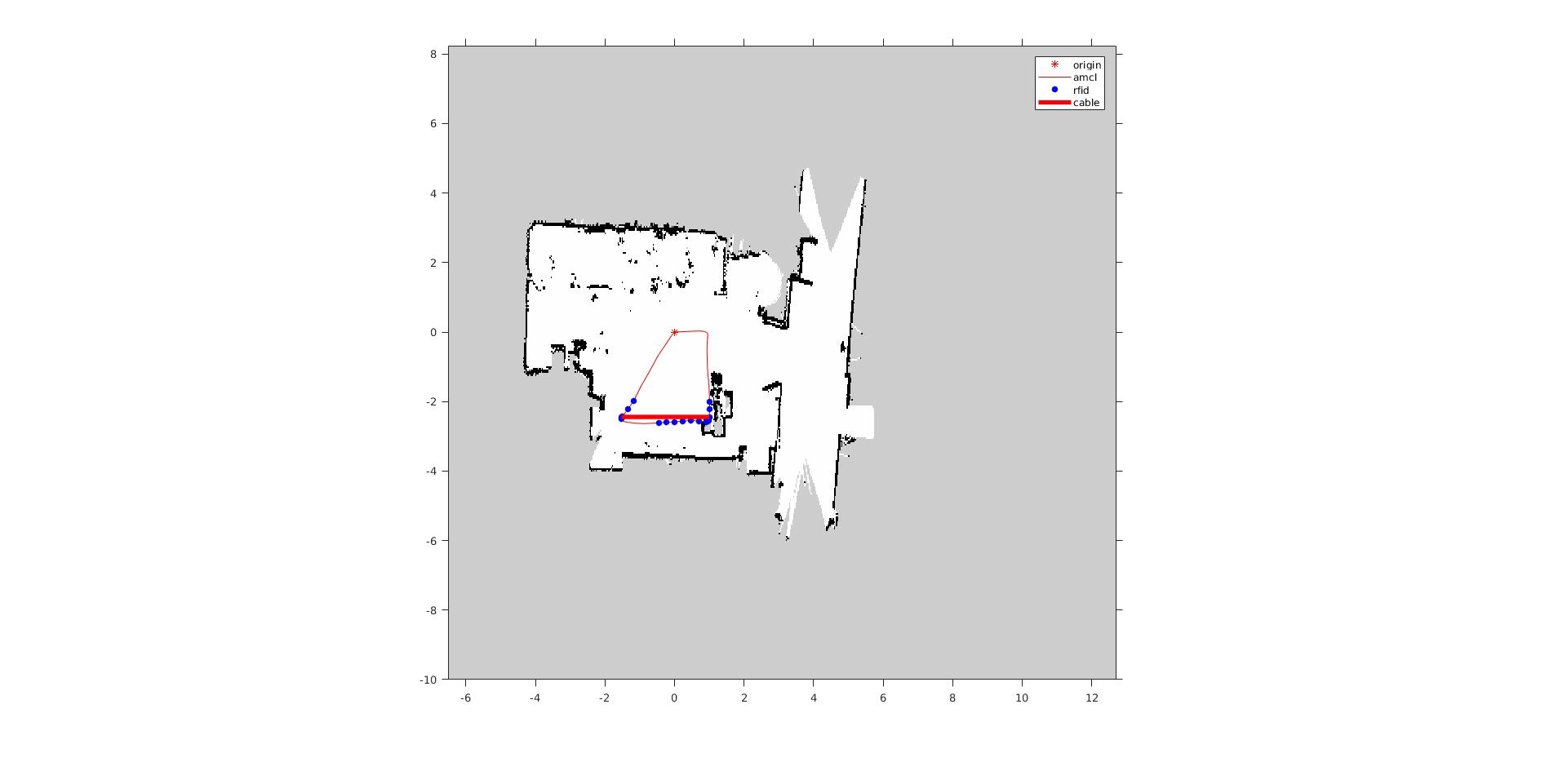 This process will likely involve lots of troubleshooting. In general, start small, change one thing at a time, and look for a change in the results or generated errors.