The purpose of this project is to use a single robot that will autonomously search a predefined area for RFID tags that simulate mines. At the same time, a second robot cooperating with the first one, will head directly to the pose of the RFID detection point in order to neutralize the mine. The move_base package is used in order to cooperate effectively in a narrow area. 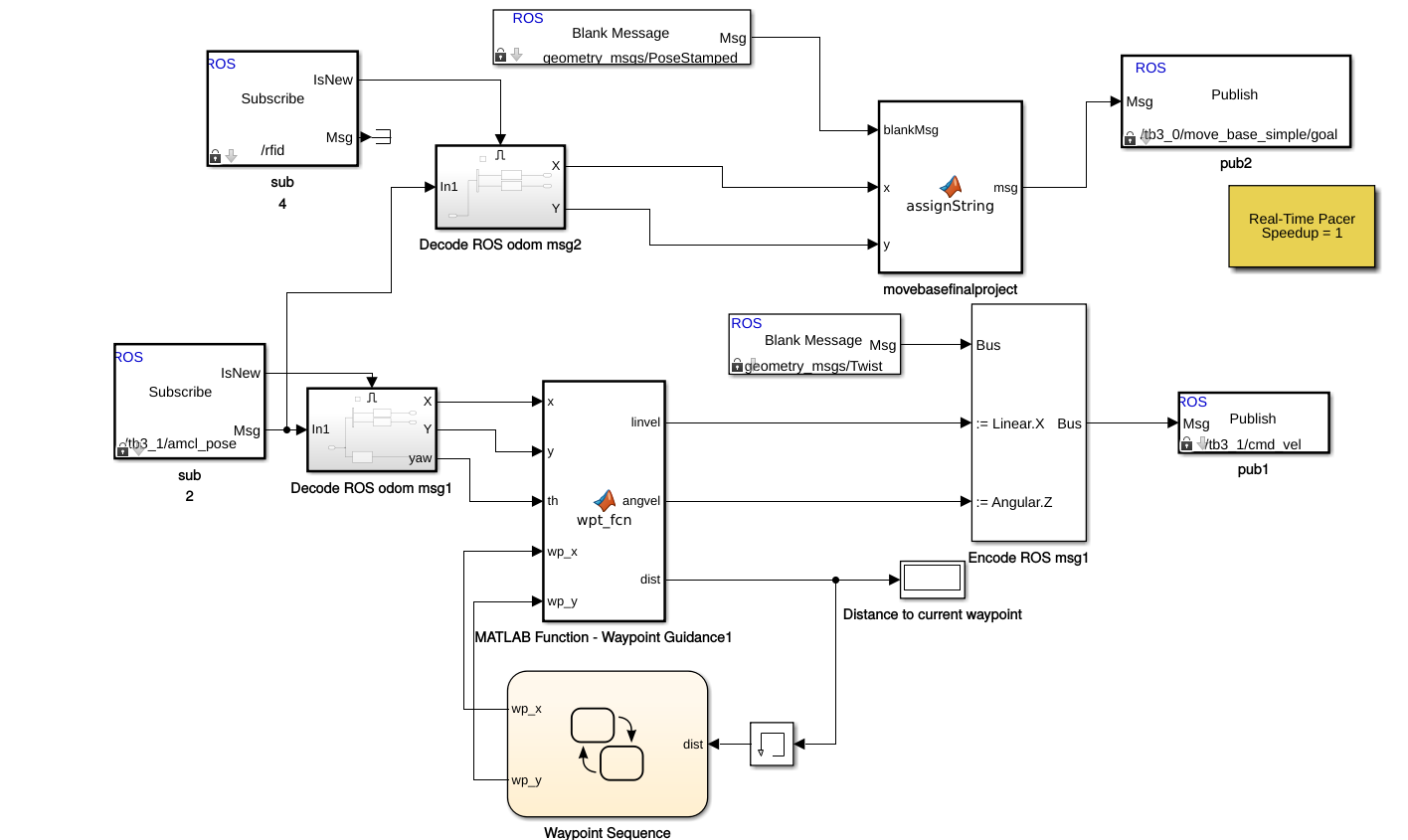 We subscribe to tb3_1/amcl_pose node in order to obtain real time information concerning the pose of the Searcher robot(tb3_1). This is vital, since /rfid node will give us only the time of the detection. This information should be correlated in order to localize the position of the rfid tag that will be fed to the second robot as a way point goal.

We drive the tb3_1 through specific way points, that take into account the effective range of the robots sensors, in order to ensure that the whole area of operation is effectively searched. If this was to be implemented in Search and Reacquire at sea, additional factors like current should be taken into account.

Tb3_1 aforementioned motion is implemented through MATLAB code that controls the linear and angular velocity, published through a Twist geometry message to the tb3_1/cmd_vel node. The advantage of this type of search is that our code is simpler and we control the speed of the search, which is proportional to the distance of the next waypoint. However, the disadvantage of publishing twist messages to cmd/vel is the fact that our navigation does not take into account the obstacles that are detected in our search area through the robot' s sensors. Since we are searching an area where the natural obstacles are known from our g-mapping procedure and since the navigation of the second robot does takes into account dynamic obstacles, we have excluded the possibility that our robots collide with each other.

The way we implement the real time re-acquire of the tags (simulating mines) is to pass the pose command through a block that is triggered if and only if we have a new rfid detection message. The challenge a beginner ROS developer has to face when trying to publish information in /tb3_0/move_base_simple/goal is the fact that we have to publish a PoseStamped geometry message and a Header std message. The PoseStamped message consists of a Pose geometry message, which is published directly from the amcl/pose node with no additional effort. However, the Header std message  has to be published through a MATLAB function that will assign a string to the header. Further information concerning this subject could be found in the Troubleshooting section below.

If everything goes as planned, your robot trajectories should look like this: 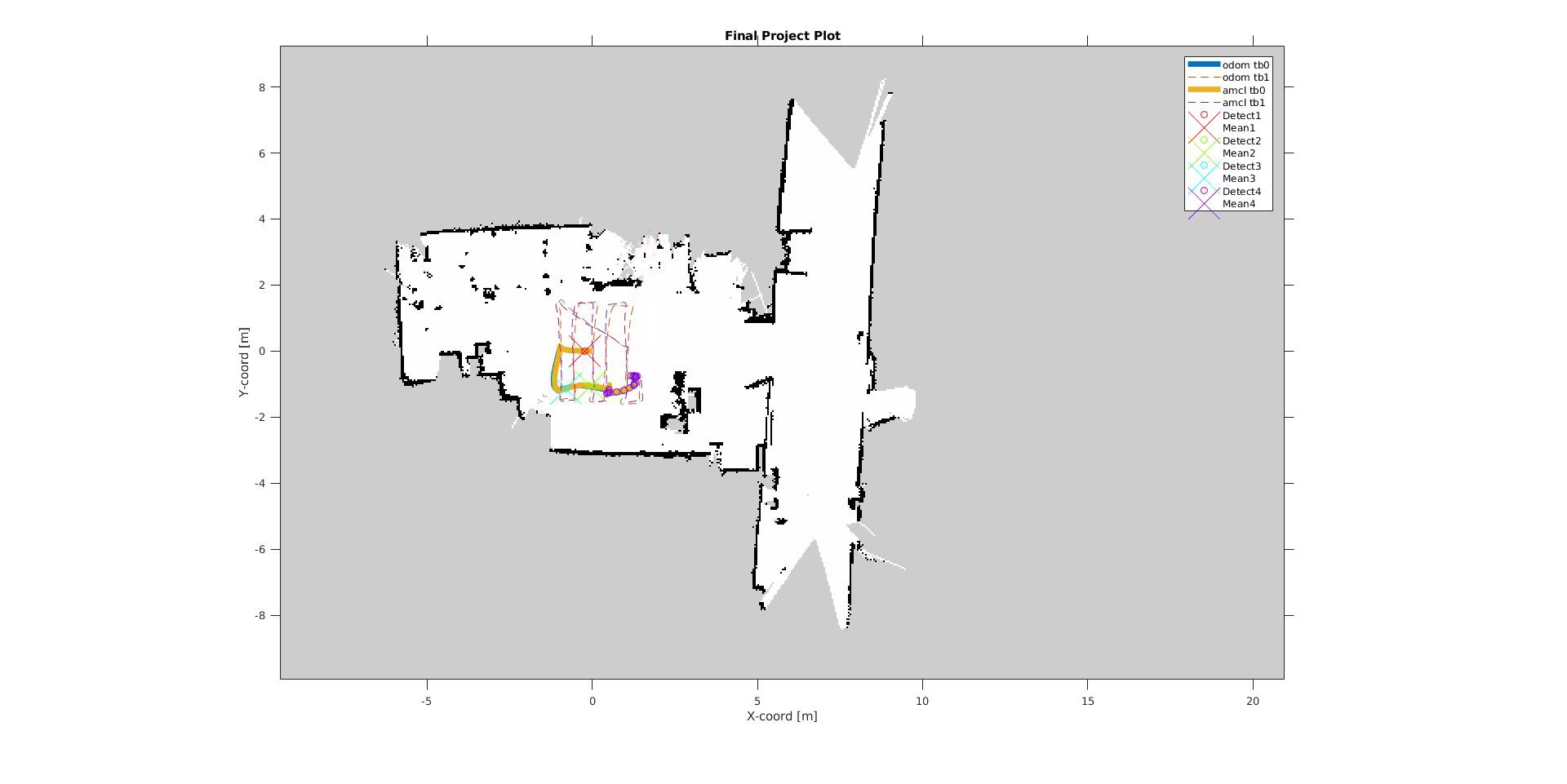 One major issue with the current configuration is managing RFID waypoints. As soon as a new RFID is detected, that location is sent to the neutralizer, preempting all previous waypoints. In order to ensure all mines are reached, the waypoints must be stored and managed. This was attempted using a goal queue as a persistent variable under the Waypoint Management block in the following Simulink model. 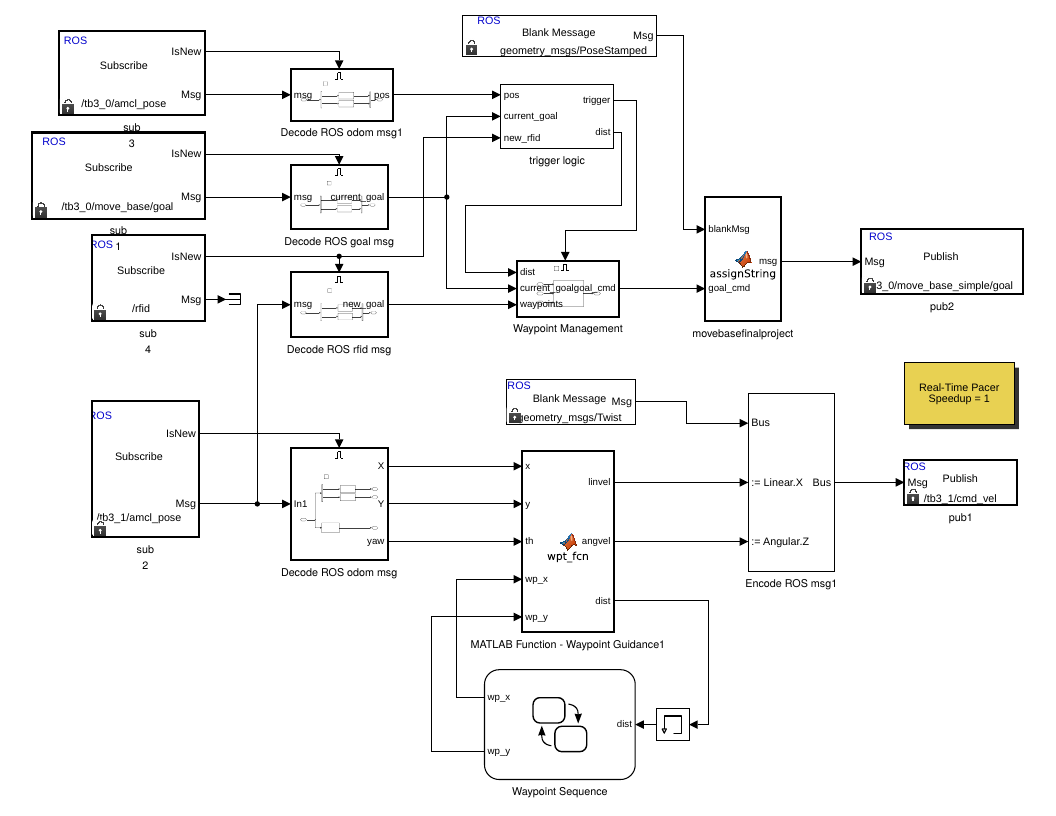 There were some limitations with Simulink, embedded MATLAB code and published messages that we needed to work around.

Unfortunately, this attempt was unsuccessful and achieves that same behavior, ignoring any previous goals. To simplify the problem, it is suggested to separate the two events (new RFID and achieved goal). This can be done by creating a separate node for managing waypoints, making the goal queue a global variable, reading/writing gloals to a file, etc.

As can be seen from the video, the search a reacquire is successful. The searcher robot successfully performed a lawnmower search of the area and detected RFID tags. The neutralizer robot then moved to the positions of the RFID detections. There are some shortfalls to this implementation, however. The Monte-Carlo localization of the neutralizer robot was not accurate enough for the first RFID detection. Giving this robot some movement to help localize itself may alleviate this problem.

Ultimately, we found that move_base, although it has many built in features, does not work easily with Simulink. Creating similar behaviors through Twist messages may be more user friendly. For future work, waypoint management should be implemented. Suggestions include using the move_base/goal message, creating a separate node, or managing a queue by reading and writing to a file.

When you want to publish the Pose.Orientation of the tb3_1/amcl node that we are subscribed to, in the tb3_0/move_base_simple/goal node, you will receive the error message shown in Remark1 in the move_base terminal and your waypoint goal will be rejected.

Solution:  Pre-define a quaternion  goal that corresponds to a yaw target of 90 degrees.

By default the goal tolerance parameters are very small. As a result the message goal reached will hardly ever reach the global and local planners, that will constantly compute new trajectory in order to reach the desired location and avoid collision with the cooperating robots.

Remark 3: Publishing a move_base/simple_goal message needs a Header Reference ID to be transmitted via a String Message.

Solution: Edit the type of the output message of the assignSTRING bus in accordance with the name of your Simulink model.

Turtlebot0 receives commands through the move_base node. Its actions can be cancelled by the following command

Turtlebot1 receives commands through a Twist message. It can be stopped by sending the following Twist message