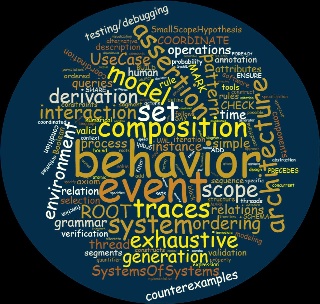 A primary objective of MP modeling is to reduce project and product risk and cost through the exposure and correction of logical errors in processes and systems.

Monterey Phoenix (MP) is a user-friendly, comprehensive modeling tool. It can be used to model anything from systems, business processes, software, hardware, organizations to environments, including behaviors and interactions. It works by transforming language input by the user into graphical outputs similar to flowchart diagrams. It is built to use everyday language so that anyone can use the tool. MP's graphical interface makes it easy to explore all the different paths in your model. Unlike flowchart diagrams, MP's graphical output automatically captures all possible scenario variations (within user defined limits) and breaks out each variation to support 360 degree visibility across the model. That's important because when you are designing something, like a process or a system, you typically want to capture all possible paths through the model. Doing so gives you a complete view of all the variations allowed by your design, so you can see all the things your design might do.

It may do things you didn't expect.

Wouldn't it be great to find those things early in the design and development process and fix them?

Monterey Phoenix can help with that.

MP supports a high degree of verification and validation early in the lifecycle to ensure behaviors have been captured correctly and completely. It can save time and money by exposing incorrect, unsafe, unsecure, or otherwise undesirable behaviors before they manifest in an actual system or system of systems (SoS). It can help resolve ambiguities, expose gaps and expand on alternative possibilities that might otherwise be hard to see. It's like a personal assistant that doesn't make mistakes!

The set of event traces generated using MP contain all behaviors, including potentially undesired behaviors that may have otherwise remained undiscovered until they manifest in the actual system or System of Systems (SoS) later during testing, deployment or operations.  The MP approach allows a far greater scope of Verification and Validation (V&V) to take place early in a system’s lifecycle, compared with use of existing methods, processes and tools alone.