Try to open MATLAB on your ME4823 computer.  If you get a message saying that the MATLAB license has expired or needs re-activation, follow these steps to re-activate the license:

Just as in the last assignment, in this assignment will be submitted as a git repository on the GitLab server.  Create a new repository named "mrc_hw3" using the server's web interface at  https://gitlab.nps.edu

Make it a ROS Package

As we did in Assignment 2, make your mrc_hw3 directory into a ROS package.

You can check that this operation was successful by using roscd to move into the mrc_hw3 directory...

Another way to check that everything is setup is to ask ROS where the mrc_hw3 package is located...

Finally we want to make sure to add the files created by catkin_create_pkg to our git repository...

at this point it is a good idea to commit your changes locally and push them to the server as a clean starting point.

This launch script should do three things...

You should be able call this launch file like this...

and then drive a turtle around with the keyboard.

Commit and push your launch/turtle.launch file to your mrc_hw3 repository.

Exercise 2: Recording and Playing Back Data

This is an extension of the tutorial on recording and playing back ROS data.

For the exercise, we will use this ROS bag file that you can download: remapped_turtle.bag

Use the rosbag program (rosbag info) to inspect the file.  What topics are included in the file?

The bag file was generated using the system described in the exercise above, but the velocity commands (of message type geometry_msgs/Twist) were remapped from the turtle1/cmd_vel topic to a new topic name.  You should be able to determine that new topic name.

You should see your turtle do something like this... 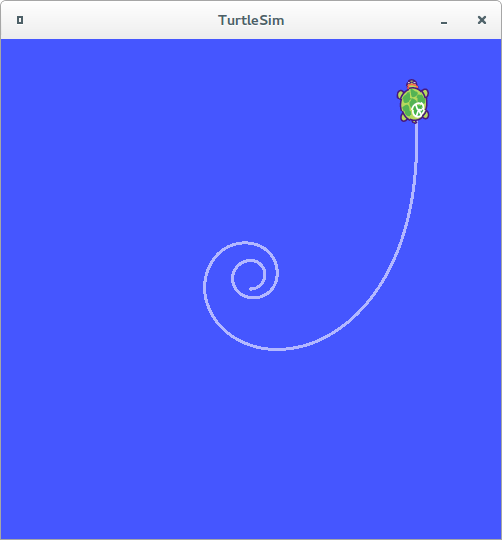 To complete the assignment, make sure that your myturtle.bag and rosgraph.png files are added to your git repository, commit and push.

Note: In general it is not recommended to use git repositories for storing bag files.  These log files can get quite large (many GB's) and they are binary files that are note amenable to the incremental changes.  We are making an exception here for convenience - and your bag file shoudl be relatively small.

This exercise uses the tools described in the Mathworks tutorials above.

When you first open MATLAB, type the command rosinit in the command window.  You should see something like this...

If not, the ROS toolbox may not be installed - see the instructor!

Use MATLAB to generate three figures based on the recorded data from Exercise 3:

Following the Working with rosbag Log Files example, develop a script called plotbag.m and put it in a directory of your package called matlab.  Your script will need to do the following...

Here is a snippet, with comments, to get started

It is recommended that you read the MATLAB documentation on the quiver plot.  Here is an example to illustrate how it works to show the state of the turtle... 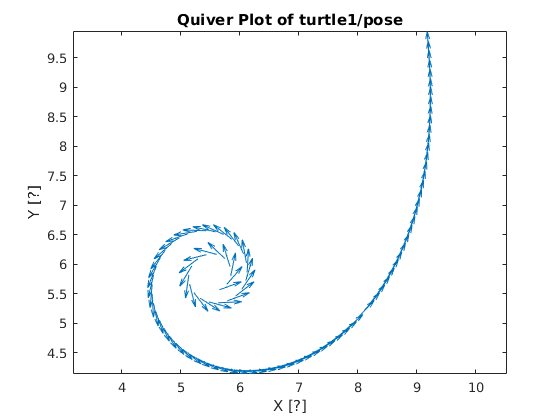 To complete the exercise, add figures (*.png files) and your  plotbag.m file to your git repository, commit and push.

You should have already completed the tutorial Getting Started with ROS in Simulink and read about the timing issues in the  Simulink and ROS Interaction article.

In the Getting Started with ROS in Simulink tutorial you created a Simulink program that looks like this: 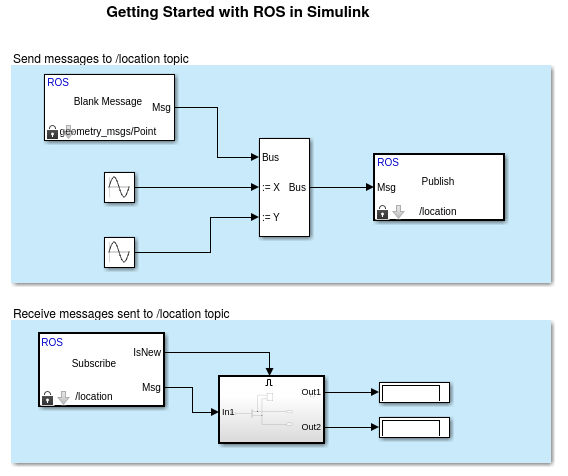 which publishes and subscribes to the to the /location topic.

This example is an offline simulation were the simulation clock runs faster than real-world time (aka the wall clock).  We can demonstrate this concept with the following experiment.

The updaterate.txt should have just two lines, where each line contains a single number for the update rate results under the two conditions. Save, commit and push the file updaterate.txt.

Pacing Simulink for Near Real-Time

If we want to adjust the execution time of Simulink so that it executes in sync with the wall clock, i.e., real-time simulation, we can use Real-Time Pacer for Simulink.

Follow these directions to add the Simulink Pacer Block to your system.

Modify the simulation from Getting Started with ROS in Simulink so that it executes at approximately 10 Hz as measured by the wall clock, i.e., real-time.

Save your new Simulink program within your mrc_hw3 repository as simulink/getting_started_paced.slx

The turtlesim_node is a good first example of a ROS-enabled robot.  It receives commands on the /turtle1/cmd_vel topic and reports is position on the /turtle1/pose topic.

In this exercise we will use a Simulink program to implement simple waypoint guidance, driving the turtle to four sequential waypoints - resulting in a turtle path that looks something like this... 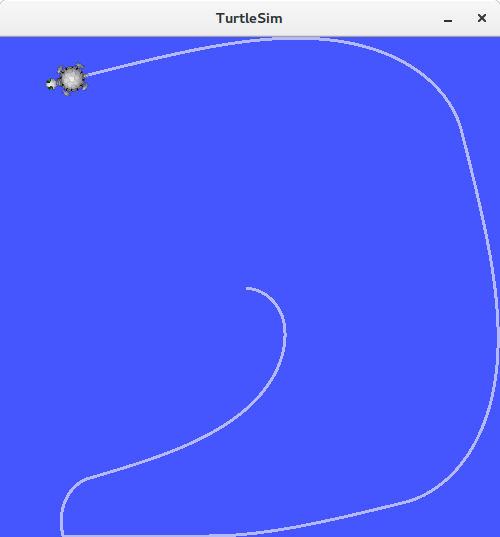 Once you have a successful run, save, commit and push the mrc_hw3/simulink/turtle_waypoint_stateflow.slx file.

After completing all the required exercises your ROS package should look something like this... 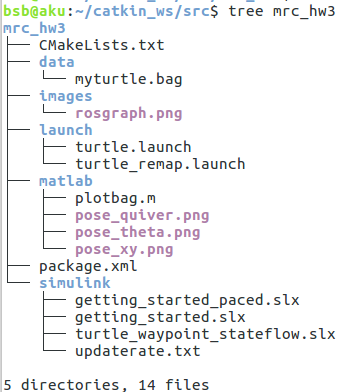 It is fine if there are other, extra files, but the files illustrated above are what you are asked to submit via git.