The overarching goal of this week's assignment is to get our fleet of Turtlebots to the point where we can implement the waypoint guidance, developed in simulation last week, on the actual hardware.

We have a number of TurtleBot 3 platforms. Depending on class size, students may need to work in pairs to share platforms.  As we move toward working with multiple robots simultaneously, students will need to share resources.

You will need the following packages added to your catkin workspace.

By adding the environmental variable declaration to your ~/.bashrc file, the variable will be set for every command line session on your laptop.

Follow these instructions to setup the Turtlebot, your laptop and the network to work together:

This builds on Running ROS across multiple machines tutorial.  You should know the IP address of your laptop and of the TurtlbotBot SBC.  It is suggested that you work through the steps of the tutorial using these two machines to get familiar with the mental model of working across the network.

In this exercise we will run ROS nodes on your laptop, connected to a Logitech Gamepad F310, and have these nodes communicate over wireless with the TurtleBot SBC.  You will then drive the Pioneer around while recording a bag file and then produce a plot of where the robot thought it went.

When everything is running, your ROS graph should look like this..

And RVIZ should show you a view of the system like this... 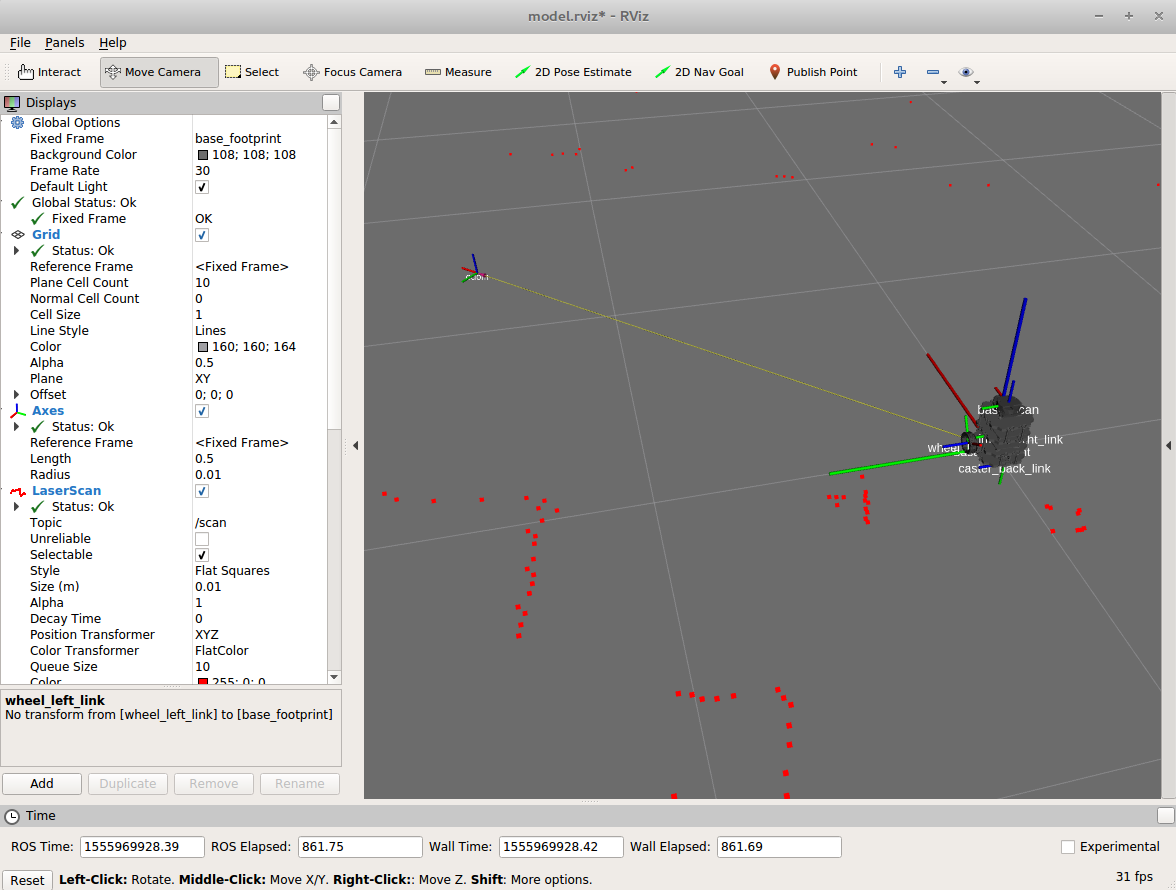 Use the ROS topic examination tools (either the command line rostopic or the graphical rqt_topic) to examine the topics being published on the system.

Once you can drive the robot, start recording a log file on your laptop:

While the data is being recorded, drive the robot around.  The path isn't important, we just want to cover some ground.  Try to drive at least 5 linear meters in any pattern.

You will need to process the Odometry messages.

Here is a snippet of MATLAB code to illustrate getting the position and orientation out of the bag file. 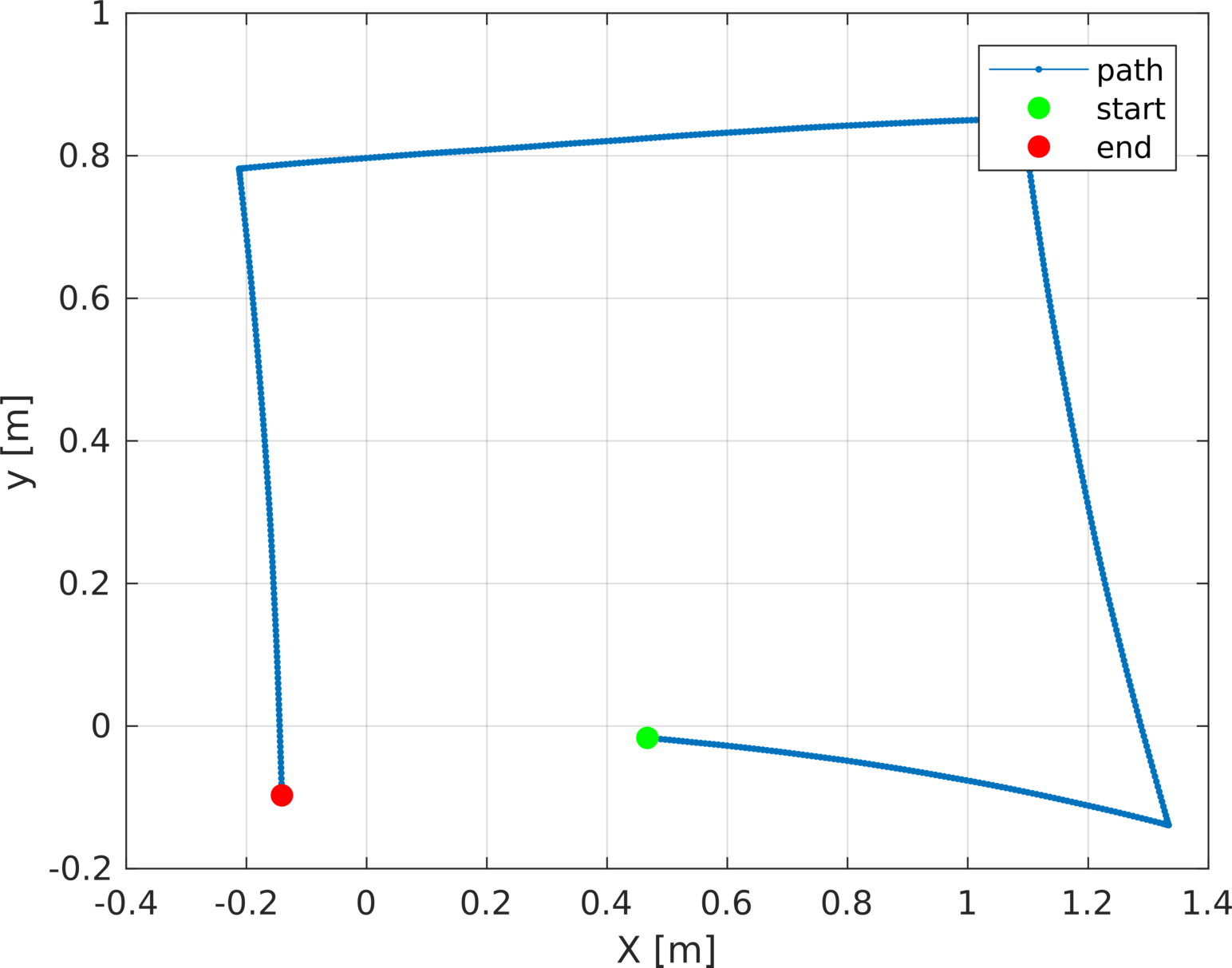 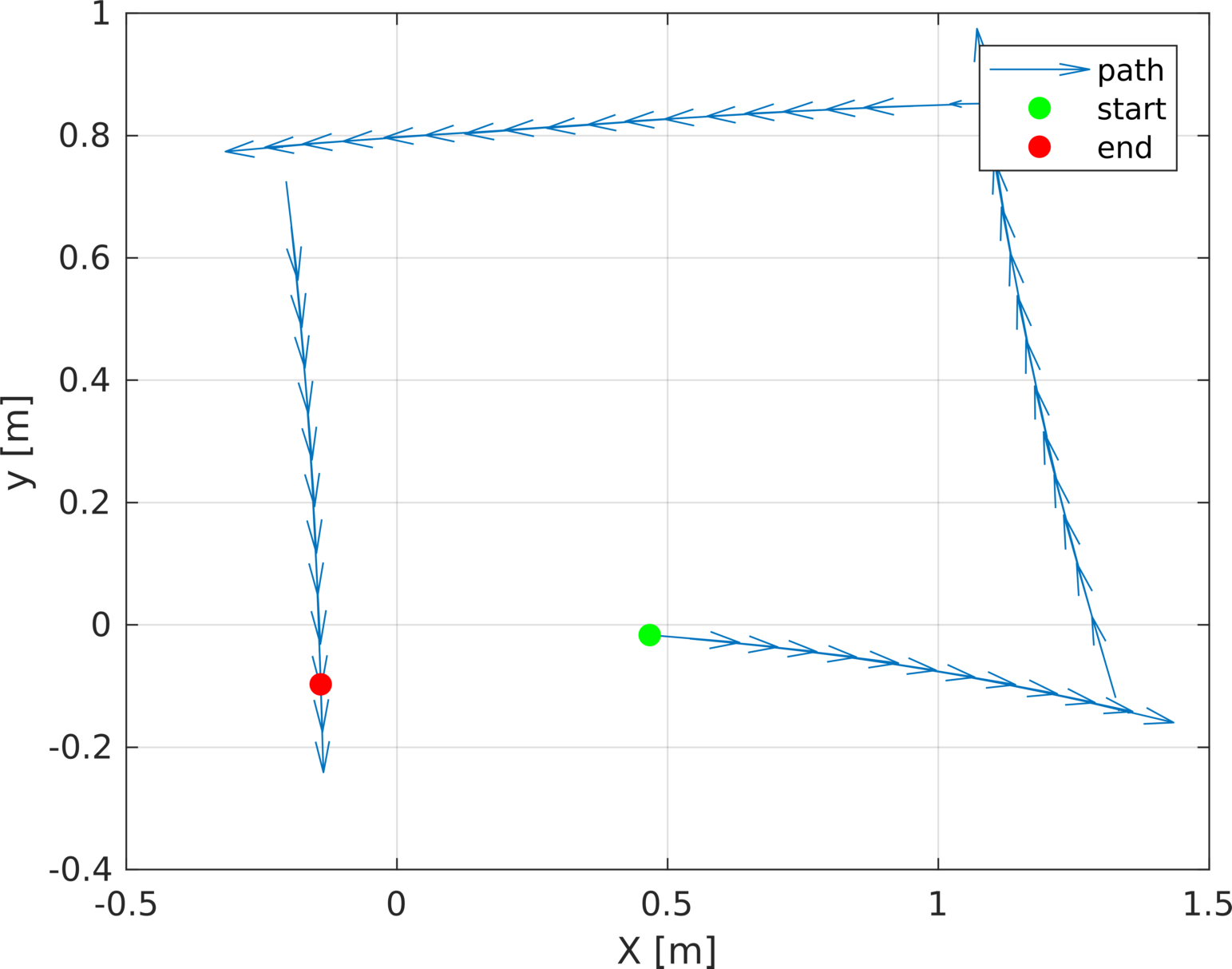 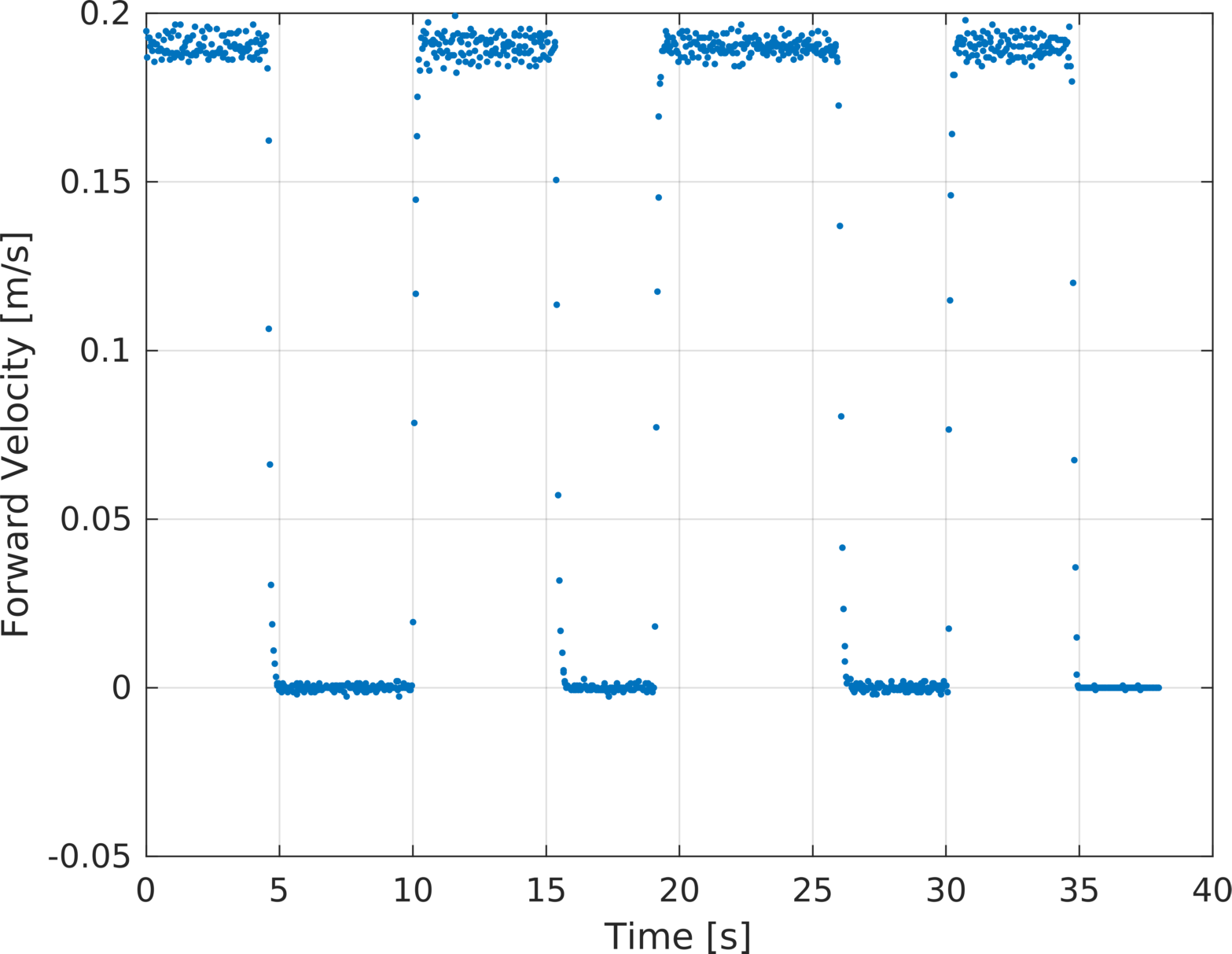 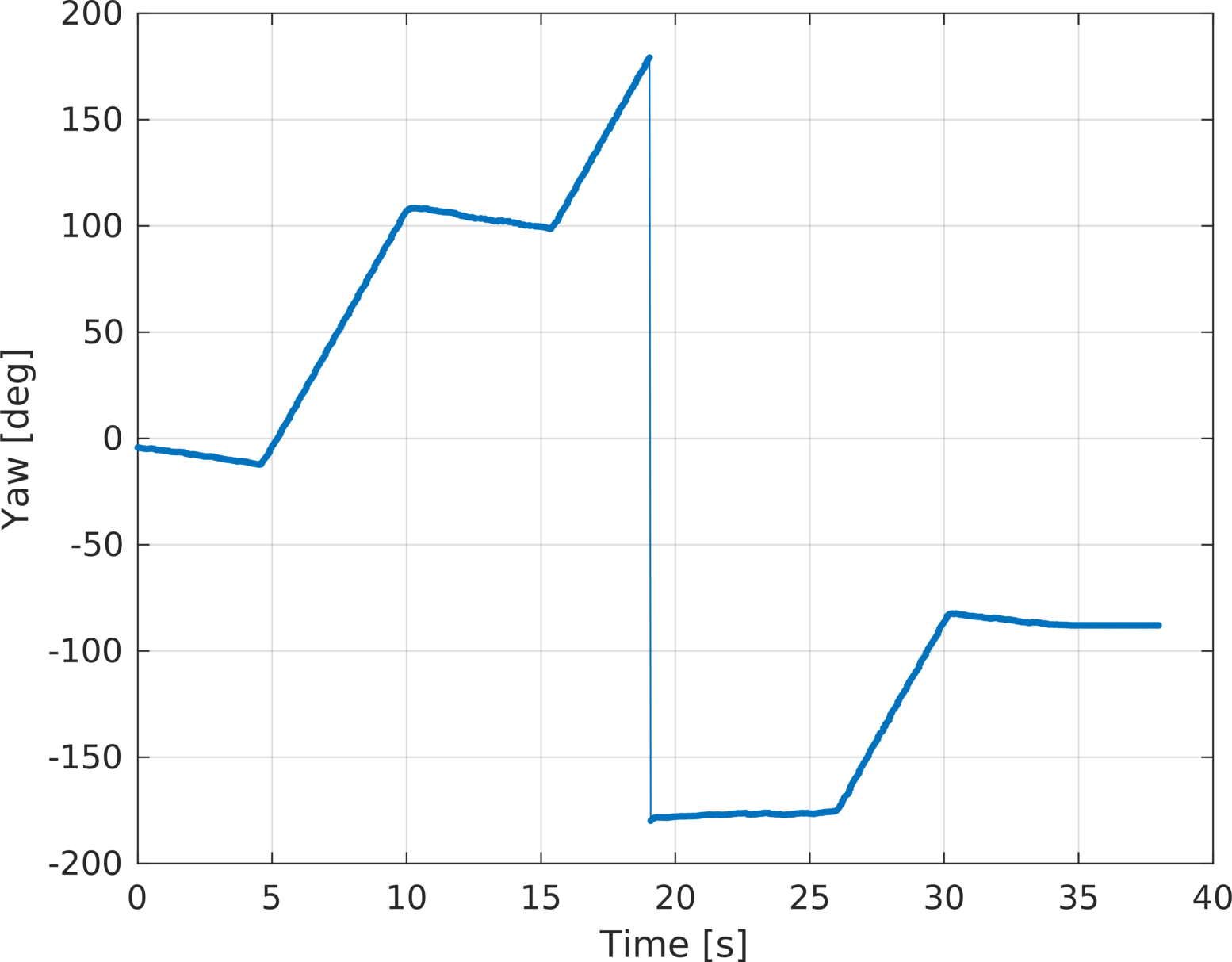 Once you have a working setup - record a bag file to collect the odometry record of a successful run through all the waypoints.

Odometry Quaternion to Position and Yaw

One thing you will certainly need to do is to extract the heading (yaw) angle from the pose information published by the Turtlebot. The Turtlebot publishes its navigation estimate as nav_msgs/Odometry messages.  Each Odometry message includes the position information as a geometry_msgs/Pose message.  Each Pose message contains orientation information as a geometry_msgs/Quaterion message.  Luckily MATLAB includes the quat2eul function to convert from a quaternion to Euler angles.   See the provided Simulink example: Simulink ROS Idioms

Porting your Simulink controller from the simulation to hardware will be challenging and will require you to use the tools we've been learning about.  Below are some recommendations, but there is not a unique way (or even a best way).

When you stop the Simulink program the robot continues moving based on the last cmd_vel it received.  There are a few ways you might manually send a Twist message to the turtlebot to stop it.

Upon completing the assignment your mrc_hw4 repository should look something like this... 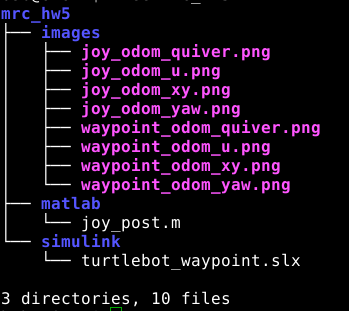