ROS: We will be using a number of new ROS packages to implement, mapping, navigation and path-planning.  Below are the main references for those capabilities.  You are not expected to work though these tutorials, but a quick review of the documentation for each package will help you understand how things are connected.

MATLAB: The move_base package provides an ROS action interface (similar to a ROS service) for providing goals to the robot which are executed by the system.  The move_base Action API will act as a server and MATLAB will act as the client

Your submission for this assignment will be a Git repository that contains a ROS package.  The name of the repository on the github.com server should be mrc_hw6 and it should be a ROS package (catkin_create_pkg).

In this exercise we will develop MATLAB functions to be able to interact with the system in a more deliberate way.

Now repeat Exercise 2 using your new MATLAB functionality in place of the RVIZ GUI interface.  You should be able to use MATLAB to initialize the pose of the TurtleBot and then send sequential goal poses to the move_base node to have the robot explore the areas A, B and C, returning to the origin.

For this exercise you will use the namespace concept to operate two TurtleBot3 robots.

You will need to have two robots setup to use the same ROS master (on your laptop).  This will require that you set the appropriate environmental variables to configure the ROS network.

Verify that you can teleoperate (joystick) two robots independently - that is, make sure you can operate one robot and then the other using the instructions from previous assignments.

To simultaneously operate two turtlebots we need to specify a unique namespace and tf_prefix so that the systems (messages, services, coordinate transforms, etc.) are independent of each other. We will use "tb3_0" for one robot and "tb3_1" for the other.  This label will be used for both the namespace (nodes, topics, etc.) and the tf_prefix (tf coordinate frames.)

(We are following the general instructions from the Turtebot3 e-Manual.)

Using MATLAB to read the bag file, generate a plot to illustrate the experiment.  The figure should contain...

Save the figure as an image within your assignment repository as images/teleop_odom_two.png

For this exercise you will create two new launch files.  Each launch file will (1) start the map_server node and use the occupancy grid map from the previous assignment and (2) start the amcl node.

When completed your rosgraph should look something like this... 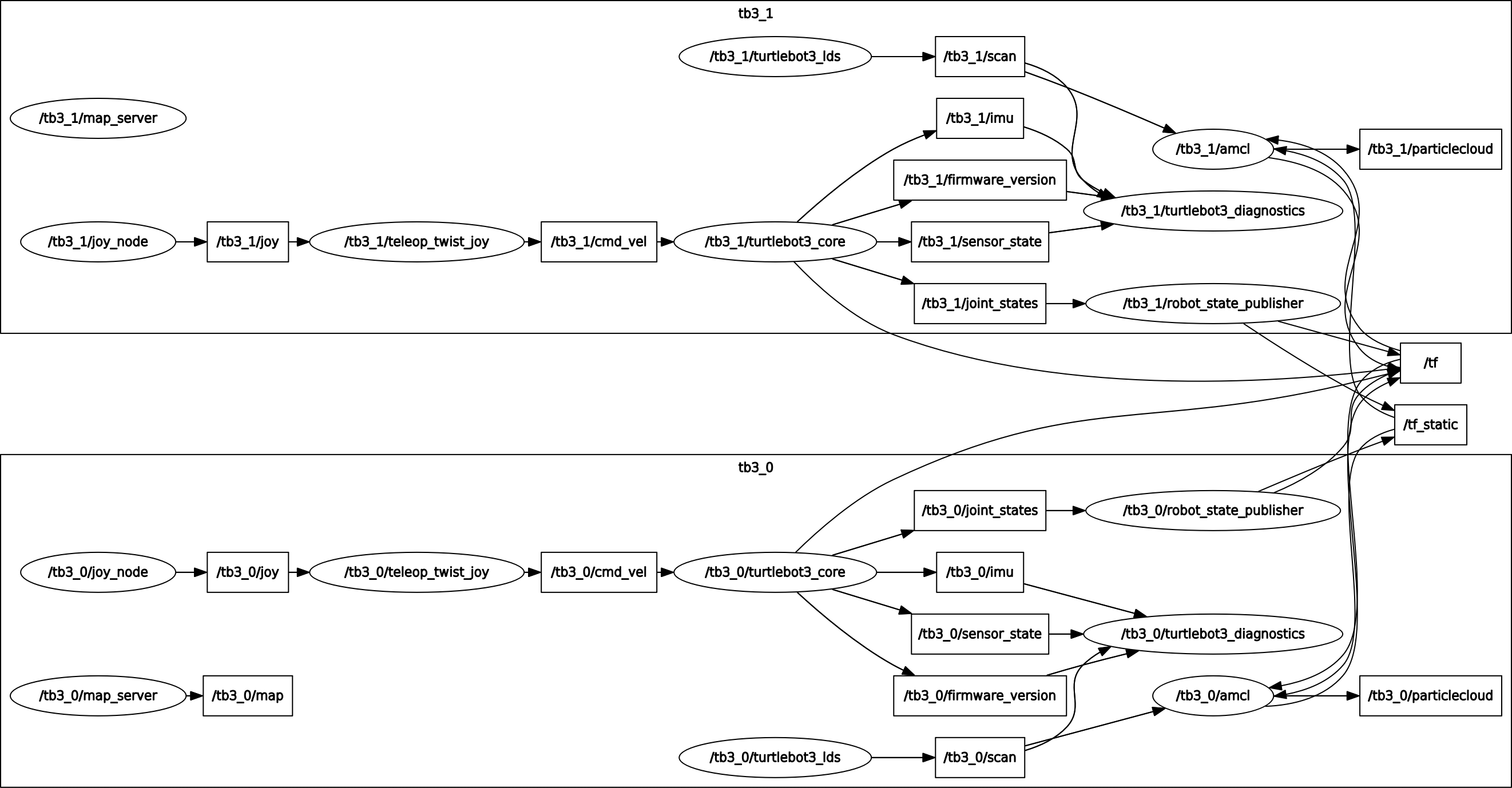 Save the graph as images/rosgraph_amcl_two.png

and your tf tree should look something like this...

Save the tree as images/frames_amcl_two.png

To help with debugging, an RVIZ configuration is provided in the turtlebot3_nps ROS package.

You should be able to...

When you have completed the exercises, your mrc_hw6 repository should look something like... 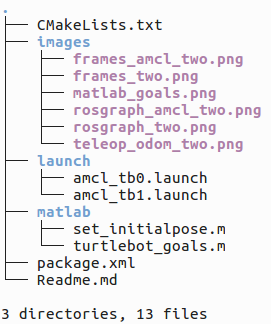