THIS PAGE IS DEPRECATED - PRESERVED FOR HISTORICAL PURPOSES.

The problem is that plugin libraries (compiled binaries) available from Clearpath robotics are for older versions of ROS (Hydro) and Gazebo (1.9).

We assume that you are using the NPS ROS development environment: Ubuntu 14.04 and ROS Indigo

You should have the following packages installed

The dynamic model of the USV is defined in the Gazebo plugin.  This C++ program is included in the kingfisher_plugins ROS package  (https://gitlab.nps.edu/bsbingha/kingfisher_plugins) in the src/kingfisher_plugin.cpp source file.  Currently there are two ways to get and use this plugin (in the future we hope to have an Ubuntu package):

Both option are described below

Still working on this and need to test

We will need to compile the Gazebo plugin for this updated version of ROS/Gazebo.

Git a working copy of the plugin source from https://gitlab.nps.edu/bsbingha/kingfisher_plugins and place it in your catkin workspace by doing the following

With any luck the project will build without errors and you will see something like this... 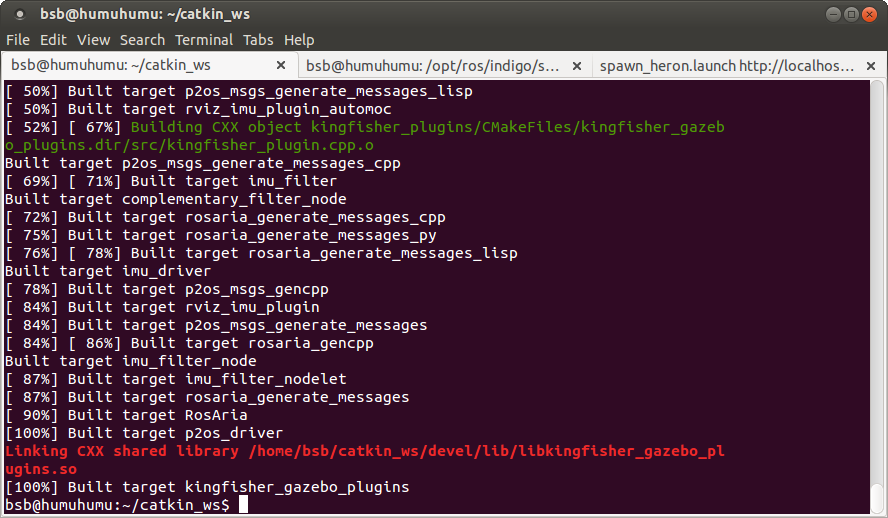 Notice the lines in green and red which are encouraging signs that the library was build.  If you look in ~/catckin_ws/devel/lib/ you should see the file libkingfisher_gazebo_plugins.so which is the compiled library that will be used by Gazebo

Launching a Kingfisher in Gazebo

We will use a separate ROS package to create an instance of the model and plugin - this is referred to as spawning the model.  Git the kingfisher_gazebo package (https://gitlab.nps.edu/bsbingha/kingfisher_gazebo)  from gitlab...

Now we should be able to use a launch file to do the following...

Two Gazebo plugins are used to define the simulation of sensor data: hector_gazebo_ros_imu and hector_gazebo_ros_gps.  The parameters of these values are currently defined in the base.urdl.xacro file (in the kingfisher_gazebo git repository).  It is a bit problematic that the parameters are defined inside the same file that defines the physical model - they should probably be moved to a separate xacro file and or defined as xacro parameters so that they can be defined in the launch file or a yaml config file.

Verified that the libkingfisher_gazebo_plugin.so was created and is in catkin_ws/devel/lib  (where catkin puts our compiled library).

Reading the error above, it turned out there was an older version of libkingfisher_gazebo_plugins.so in the directory /usr/lib/x86_64-linux-gnu/gazebo-2.2/plugins.  Using ldd I determined that this older version was linked to shared libraries not on the machine.  I moved the older version to a different name...

so that Gazebo would use the version in catkin_ws/devel/lib.  Then things worked!