Suppose that you have a class which meets more than one time.  This is represented in MP by using repetitive event patterns.  Repeated events are the analogy to "loops" in other programming languages. Both set  ('{' ...'}') and sequence ( (...) ) iteration are supported.  The examples show sequence iteration but are equally applicable to set iteration.

This is a good time to explain the concept of scope which is basically how many times (maximum) each iteration (repetitions indicated by the (*…*), (+…+) syntax) can run.   Scope only makes sense if there is some iteration in your model which is not always necessary. Be careful with scope as you can quickly generate a LOT of traces from even a moderately sized model.

Always use scope 1 (default setting) to get started in your modeling.  Unlike other programming languages, note that scope settings are  controlled when you run your model.  If you need some restrictions on scope they are indicated separately in the model via ENSURE statements (which filter precluded conditions from your traces).

The various types of iteration are discussed below.

Example 8 Attend_class with one or more iteration

/* this is a composite event definition */

/* these activities may happen in parallel */

Clicking on run (scope still at default 1) produces 6 traces:  (two flavors of Attend_class) x (three flavors of post class activities).  Pulling to the side allows you to clearly see the concurrent events in the model. 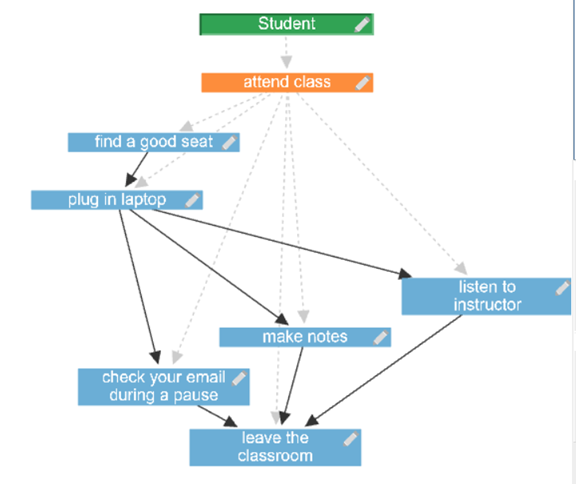 In the previous Attend_class example set the scope to 2 using the slider tool at the top of the model (shown below as circled).  The syntax change for 1 or more iterations is shown highlighted. 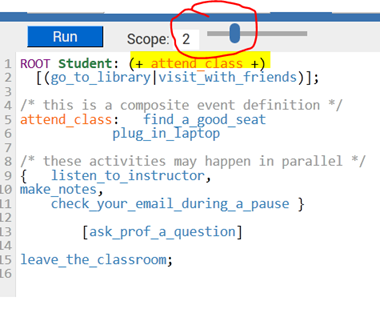 Figure 13 Choosing scope from the GUI

MP produces 18 traces.    Notice that the first 6 traces are scope 1.   The next 12 traces have Attend_class happening exactly twice.  The difference in the various traces is caused by the optional events happening or not.

If the repetition of Attend_class is changed to zero or more (as indicated below) and scope 2 is run, you now get 21 traces.  This is the prior 18 cases plus the three cases corresponding to not going to any classes.

/* this is a composite event definition */

/* these activities may happen in parallel */

Note: The difference between the (*…*) syntax and the [ ] syntax is nothing if you run at scope one (single iteration maximum) since the [ ] really means 0 or 1 instances of this event.  So,  you run at a higher scope, Go_to_library still will run only 0 or 1 time, but Attend_class can appear any number of times up to the scope.

"While" and "Repeat Until" Style Looping

From the MP Guide Section 2.3:

Behavior of the loop

can be modeled (in pseudo-code) as

In MP syntax this modeled as a composite event as shown in the example:

Running this on scope 3 produces four traces: one for (never executes loop body), and then one for each number of possible iterations (as specified by scope setting) through the loop body.

The (*…*) syntax means that the loop could possibly be executed zero times.  In contrast a "repeat…until" loop is always executed at least once, which is implemented the same way as the above example, but uses the (+…+) repetition syntax.